ProCall 7 Enterprise SR2 was released on 29 Jun 2021 as a service release.

Note on the update

When performing the update, please follow the instructions for the update within a product version. Before you start the update, we strongly recommend creating a backup of your environment.

Not the latest version yet?

With Service Release 2 of ProCall Enterprise 7, the focus continues to be on improving the softphone functions. In particular, we have addressed the security and simplification of the SIP connection, the communication quality for softphone calls, as well as other minor improvements for everyday work. In addition, the diversity of cloud providers was taken into account and certifications for the cloud telephone systems from B.I.S. Telefonsysteme (bis. cloud), C+ITEC AG (Universe Cloud Connect) and MK Netzdienste (MK-Centrex) were carried out.

Securing communication channels is becoming increasingly important, which is also reflected in the recommendation ((NET.4.2 VoIP) of the German Federal Office for Information Security (BSI) on encrypted VoIP telephony. With ProCall 7 Enterprise SR2, in addition to the already encrypted connection between ProCall client and UCServer, the possibility is created to also encrypt the connection to the telephone system. Technically, this is done via  SIPS and SRTP. 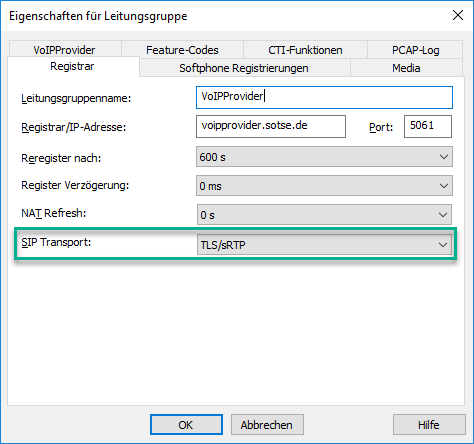 Encryption and protocols SIPS and SRTP

With SIPS, the signaling path between UCServer and SIP Registrar is encrypted with TLS, while with SRTP the media packets (the communication) between Media Server and PBX or phones are encrypted.
The signaling between ProCall client and UCServer has always been optionally secured with TLS. In addition, the media packets are always encrypted with DTLS SRTP through WebRTC.
When setting up the softphone functionality, encryption can be activated if, for example, telephone systems that support this feature are to be connected via the internet.

Furthermore, it is now possible to configure the encryption of the control connection between UCServer and Media Server via the UCServer administration. This eliminates the need for time-consuming manual adjustments in XML files.

Until now, configuring the SIP connection for telephone systems where the user name and call number differed was cumbersome and time-consuming. With Service Release 2, it is now possible to make all relevant settings in one step.

Example: Softphone registration in one step 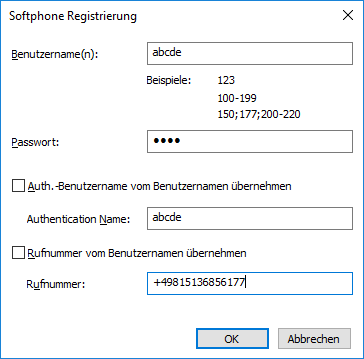 Another simplification of the SIP configuration brings the import function for SIP lines. CSV files (with the information about the individual lines) can now be imported so that the lines do not have to be created manually.
The following scheme is used here: <username>,<authusername (optional)>,password (optional),phone number.

With Service Release 2, the speed of call setup and support for changing network environments has been improved. For example, the softphone connection now supports Early Media, which leads to the faster connection of telephone calls via the softphone.
During an ongoing softphone call, network changes are now also reliably supported. For example, it is now possible to leave the WLAN during an ongoing call via ProCall Mobile and to continue the call via the data connection of the LTE network.

In order to take into account the variety of cloud telephone systems available on the market, additional connection profiles were added to ProCall Enterprise and the necessary technical prerequisites were created.

Deeper integration of ProCall for iOS

Calls can now be initiated from other apps and made via ProCall Mobile. Technically speaking, ProCall for iOS now supports tel URIs.

Improvement of the contact view in ProCall for Android

New technology for custom tabs of ProCall client for Windows

The ProCall client for Windows custom tabs now supports the Chromium-based WebView2. This means that custom tabs are optionally no longer displayed via an embedded Internet Explorer but with the new Microsoft Edge browser (Chromium).

Since the setup for this does not work "out of the box", please contact our technical support if you are interested or represent Custom Tabs via Edge (Chromium).